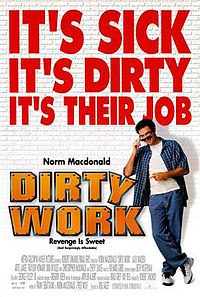 Dirty Work is a 1998 American buddy black comedy film directed by Bob Saget. Based on the short story "Vengeance is Mine Inc." by Roald Dahl, the film follows long-time friends Mitch (Norm Macdonald) and Sam (Artie Lange) who start a revenge-for-hire business, and work to fund heart surgery for Sam's father Pops (Jack Warden). When they take on work for an unscrupulous businessman (Christopher McDonald), in order to be paid, they create a revenge scheme of their own. Traylor Howard also stars and notable cameo appearances include Don Rickles, Rebecca Romijn, John Goodman, Gary Coleman, Chevy Chase, David Koechner, Chris Farley (in his final film appearance), and Adam Sandler as Satan.

Growing up, friends Mitch Weaver and Sam McKenna are taught by Sam's hard-nosed father, "Pops" McKenna, not to "take crap from anyone". To that end, the pair plant a bunch of guns in a schoolyard bully's desk and have him arrested for gun possession; next, they catch a kid-fondling crossing guard in the act, after having applied Krazy Glue to the seat of Mitch's pants.