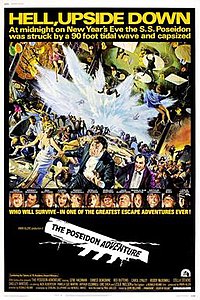 The Poseidon Adventure is a 1972 American disaster film directed by Ronald Neame, produced by Irwin Allen, and based on Paul Gallico's 1969 novel of the same name. It features an ensemble cast, including five Oscar winners: Gene Hackman; Ernest Borgnine; Jack Albertson; Shelley Winters; and Red Buttons. The plot centers on the fictional SS Poseidon, an aged luxury liner on her final voyage from New York City to Athens before being sent to the scrapyard. On New Year's Eve, she is overturned by a tsunami. Passengers and crew are trapped inside, and a preacher attempts to lead a small group of survivors to safety.

The SS Poseidon, an ocean liner slated for retirement, travels to Athens. Despite safety concerns from the captain, the new owner's representative insists he go full speed to save money, preventing Poseidon from taking on ballast.