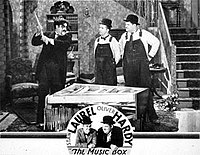 The Music Box is a Laurel and Hardy short film comedy released in 1932. It was directed by James Parrott, produced by Hal Roach and distributed by Metro-Goldwyn-Mayer. The film, which depicts the pair attempting to move a piano up a long flight of steps, won the first Academy Award for Best Live Action Short (Comedy) in 1932. In 1997, it was selected for preservation in the National Film Registry by the Library of Congress as being "culturally, historically, or aesthetically significant".

In a music store, a woman (Hazel Howell) orders a player piano as a surprise birthday gift for her husband. She tells the manager her address — 1127 Walnut Avenue — and he hires the Laurel and Hardy Transfer Company to deliver the piano in their freight wagon.