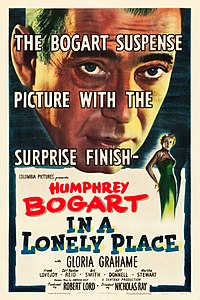 In a Lonely Place is a 1950 American film noir directed by Nicholas Ray and starring Humphrey Bogart and Gloria Grahame, produced for Bogart's Santana Productions. The script was written by Andrew P. Solt from Edmund H. North's adaptation of Dorothy B. Hughes' 1947 novel of the same name.

Dixon "Dix" Steele is a down-on-his-luck Hollywood screenwriter who has not had a hit "since before the war." While driving to meet his agent, Mel Lippman, Dix's explosive temper is revealed when, at a stoplight, he engages with another motorist in a confrontation that almost becomes violent. Meeting with Mel at a nightclub, Dix is cajoled into adapting a book for a movie. The hat-check girl, Mildred Atkinson, is engrossed in reading the copy meant for Dix; since she only has a few pages left to go, she asks to finish before passing it on to Dix. Dix has a second violent outburst when a young director badmouths Dix's friend Charlie, a washed-up actor.