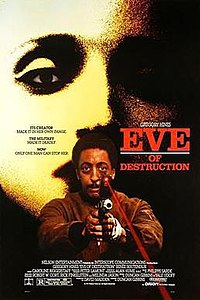 Eve of Destruction is a 1991 American science fiction/action film. The film is about a nuclear armed prototype android named EVE gone amok while being field tested by the military in a big city. The film stars Gregory Hines as Col. Jim McQuade and Dutch actress Renée Soutendijk (in her first U.S. film) with the dual roles as the robot's creator Dr. Eve Simmons, and the robot Eve herself.

EVE VIII is a military android created to look and sound exactly like her creator, Dr. Eve Simmons. When the robot is damaged during a bank robbery, it accesses memories it was programmed with by her creator. The memories used though are dark and tragic ones.