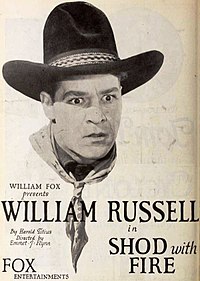 Shod with Fire is a 1920 American silent Western film directed by Emmett J. Flynn and starring William Russell, Helen Ferguson, Betty Schade, Robert Cain, and George Stewart. It is based on the 1918 novel Bruce of the Circle A by Harold Titus. The film was released by Fox Film Corporation in February 1920.