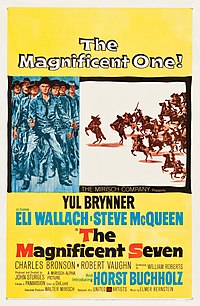 The Magnificent Seven is a 1960 American Western film directed by John Sturges. The screenplay by William Roberts is a remake – in an Old West–style – of Akira Kurosawa's 1954 Japanese film Seven Samurai (itself initially released in the United States as The Magnificent Seven). The ensemble cast includes Yul Brynner, Steve McQueen, Charles Bronson, Robert Vaughn, Brad Dexter, James Coburn, and Horst Buchholz as a group of seven gunfighters, and Eli Wallach as their main antagonist. The seven title characters are hired to protect a small village in Mexico from a group of marauding bandits, led by Wallach.

A gang of bandits led by Calvera periodically raids a poor Mexican village for food and supplies. After the latest raid, during which Calvera kills a villager, the village leaders decide they have had enough. On the advice of the village elder, they decide to fight back. Taking their few objects of value, three villagers ride to a town just inside the United States border hoping to barter for weapons. They are impressed by Chris Adams, a veteran Cajun gunslinger, and approach him for advice. Chris suggests they instead hire gunfighters to defend the village, as "men are cheaper than guns." At first agreeing only to help them recruit men, Chris eventually decides to lead the group. Despite the meager pay offered, he finds five willing gunmen.