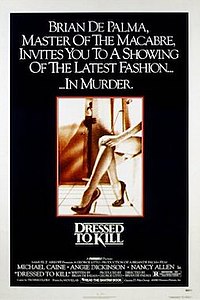 Dressed to Kill is a 1980 American neo-noir slasher film written and directed by Brian De Palma. Starring Michael Caine, Angie Dickinson, Nancy Allen, and Keith Gordon, the film depicts the events leading up to the murder of a New York City housewife (Dickinson) before following a prostitute (Allen) who witnesses the crime. It contains several direct references to Alfred Hitchcock's 1960 film Psycho, such as a man dressing as a woman to commit murders, significant shower scenes, and the murder of the female lead early in the picture.

Kate Miller is a sexually frustrated housewife who is in therapy with New York City psychiatrist Dr. Robert Elliott. During an appointment, Kate attempts to seduce him, but Elliott rejects her advances. Kate goes to the Metropolitan Museum of Art where she has an unexpected flirtation with a mysterious stranger. Kate and the stranger stalk each other through the museum until they finally wind up outside, where Kate joins him in a taxi. They go to his apartment and have sex.