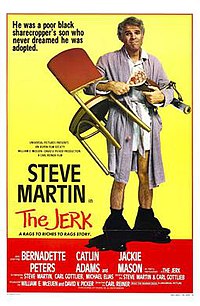 The Jerk is a 1979 American comedy film directed by Carl Reiner and written by Steve Martin, Carl Gottlieb, and Michael Elias (from a story by Steve Martin and Carl Gottlieb). This was Martin's first starring role in a feature film. The film also features Bernadette Peters, M. Emmet Walsh, and Jackie Mason.

Navin R. Johnson is the white adopted son of black sharecroppers, who grows to adulthood naïvely unaware of his obvious adoption. He stands out in his family not just because of his skin color but because of his utter lack of rhythm when his adoptive family plays spirited blues music. One night, he hears a champagne-style rendition of "Crazy Rhythm" on the radio and spontaneously begins to dance; he excitedly sees this as a calling and decides to leave for St. Louis, from which the song was broadcast. On the way, he stops at a motel, where a dog wakes him up by barking at his door. Navin thinks the dog is trying to warn of a fire. He wakes up the other hotel guests to rescue them, telling the dog they will name him "Lifesaver." After everyone realizes it was a false alarm, one of the guests suggests naming the dog "Shithead." Navin takes the dog as his own, indeed naming it Shithead.