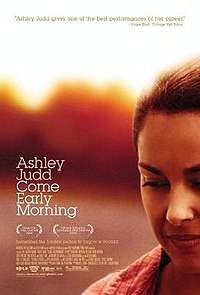 Come Early Morning is a 2006 American film starring Ashley Judd and Jeffrey Donovan. It marked the directorial debut of Joey Lauren Adams. The movie was shot throughout the metropolitan Little Rock, Arkansas area including Pulaski Heights, and Adams' hometown of North Little Rock. It premiered for wide release in Little Rock on December 14, 2006.

Lucy Fowler, a construction firm employee, has a habit of drinking on weekends, having a one-night stand, and, come early morning, waking up and leaving quickly, checking out and paying for the motel room.