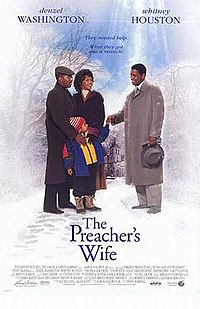 The Preacher's Wife is a 1996 American comedy-drama film directed by Penny Marshall and starring Denzel Washington, Whitney Houston, and Courtney B. Vance. It is a remake of the 1947 film The Bishop's Wife, which in turn was based on the 1928 novel of the same name by Robert Nathan.

A voiceover by the preacher's son Jeremiah guides the viewer through the film.