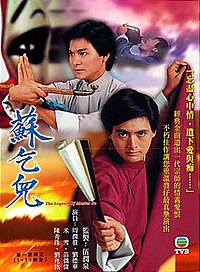 The Legend of Master So (蘇乞兒) is a TVB television series, premiered on 27 September 1982. Theme song "Forgets With All One's Heart the Sentiment" (忘盡心中情) composition and arrangement by Joseph Koo, lyricist by Wong Jim, sung by Johnny Yip.

this TV series set in the 1920s during kuomintang era so chan whom live in the 20th century.