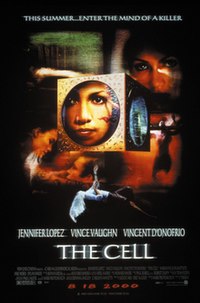 The Cell is a 2000 science fiction psychological horror film directed by Tarsem Singh in his directorial debut, and starring Jennifer Lopez, Vince Vaughn, and Vincent D'Onofrio. The film follows scientists as they use experimental technology to enter the mind of a comatose serial killer in order to locate where he has hidden his latest kidnap victim.

Child psychologist Catherine Deane (Jennifer Lopez) is hired to conduct an experimental virtual reality treatment for coma patients: a "Neurological Cartography and Synaptic Transfer System" device managed by doctors Henry West and Miriam Kent (Dylan Baker and Marianne Jean-Baptiste) that allows her to enter a comatose mind and attempt to coax them into consciousness. The technology is funded by the parents of her patient, Edward Baines (Colton James), a young boy left comatose by a viral infection that causes an unusual form of schizophrenia. Despite Deane's lack of progress, West and Kent reject Deane's suggestion to reverse the feed to bring Baines into her mind, fearing the consequences of him experiencing an unfamiliar world.