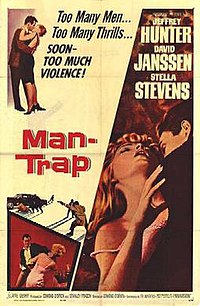 Man-Trap is a 1961 American drama film about a Korean War veteran who becomes involved in a scheme to steal $3.5 million from a Central American dictator. The film was directed by Edmond O'Brien and stars Jeffrey Hunter, David Janssen and Stella Stevens. The plot is based on the short story "Taint of the Tiger" by John D. MacDonald, published in Cosmopolitan magazine in March 1958.

Although injured in combat, Matt Jameson returns home from Korea safely and works in California as an engineer. He is unhappily married to Nina, an alcoholic, and is attracted to his boss's secretary, Liz Addams.