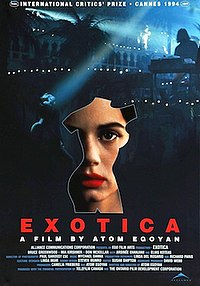 Exotica is a 1994 Canadian psychological drama film written and directed by Atom Egoyan, and starring Bruce Greenwood, Mia Kirshner, Elias Koteas, Sarah Polley, and Don McKellar. Set primarily in the fictional Exotica strip club in Toronto, the film concerns a father grieving over the loss of a child and obsessed with a young stripper. It was inspired by Egoyan's curiosity about the role strip clubs play in sex-obsessed societies. Exotica was filmed in Toronto in 1993.

Francis Brown, a tax auditor for Revenue Canada, is a regular visitor to a Toronto strip club called Exotica. He always has Christina, an exotic dancer dressed in a schoolgirl uniform, give him a private dance. This inspires the jealousy of the club's DJ, Eric, Christina's former boyfriend who has also impregnated the club's owner, Zoe. While at the club, Francis pays his brother Harold's teenage daughter, Tracey, to "babysit". However, Francis has no children and the girl merely practices music alone on his piano until Francis returns and drives her home. Francis' friendship with Harold is strained, as Francis found out that Harold and Francis' wife were having an affair after she died in a car accident, which also left Harold a paraplegic. Francis' daughter Lisa was kidnapped and murdered a few months before the accident, and he was one of the suspects but was later exonerated. These events have left a huge psychological scar on Francis.