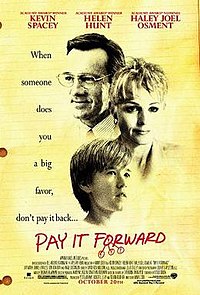 Pay It Forward is a 2000 American romantic drama film directed by Mimi Leder. The film is based loosely on the novel of the same name by Catherine Ryan Hyde. It is set in Las Vegas, and it chronicles 11- to 12-year-old Trevor McKinney's launch of a goodwill movement known as "pay it forward". It stars Haley Joel Osment as Trevor, Helen Hunt as his alcoholic single mother Arlene McKinney, and Kevin Spacey as his physically and emotionally scarred social studies teacher Eugene Simonet. The film was released on October 20, 2000 to mixed reviews and grossed $55 million worldwide.

Trevor McKinney begins 7th grade in Las Vegas. His social studies teacher, Eugene Simonet, assigns the class to put into action a plan that will change the world for the better. Trevor calls his plan "pay it forward", which means the recipient of a favor does a favor for three others rather than paying it back. However, it needs to be a favor that the recipient cannot complete themselves. Trevor implements the plan himself, forming a branch of good deeds. His first deed is to let a homeless man named Jerry live in his garage, and Jerry pays the favor forward by doing car repairs for Trevor's mother Arlene, though Jerry later disappoints Trevor by moving out and returning to drug use.