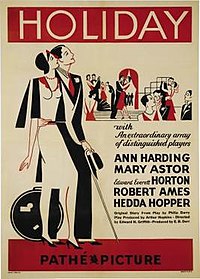 Holiday is a 1930 American pre-Code romantic comedy film which tells the story of a young man who is torn between his free-thinking lifestyle and the tradition of his wealthy fiancée's family. It stars Ann Harding, Mary Astor, Edward Everett Horton, Robert Ames and Hedda Hopper. It was produced and released by Pathé Exchange.