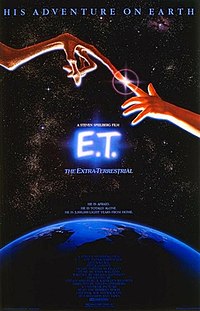 E.T. the Extra-Terrestrial (or simply E.T.) is a 1982 American science fiction film produced and directed by Steven Spielberg and written by Melissa Mathison. It tells the story of Elliott, a boy who befriends an extraterrestrial, dubbed E.T., who is left behind on Earth. Along with his friends and family, Elliott must find a way to help E.T. find his way home. The film stars Dee Wallace, Henry Thomas, Peter Coyote, Robert MacNaughton and Drew Barrymore.

Alien botanists secretly visit Earth at night to gather specimens in a California forest. One of them separates from the group, fascinated by the distant city lights, but U.S. government vehicles arrive and chase the startled creature. The other aliens depart, abandoning him on Earth. In a nearby neighborhood in the San Fernando Valley, ten-year-old Elliott Taylor's suspicions are roused when he pitches a baseball into a tool shed, and the ball is thrown back. Later that night, Elliott returns with a flashlight, discovering the creature among the cornstalks. He shrieks and flees the scene.