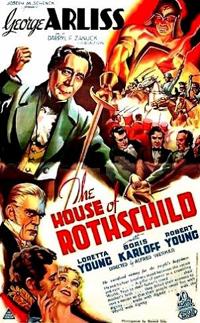 The House of Rothschild 1934

The House of Rothschild is a 1934 American pre-Code historical drama film directed by Alfred L. Werker and starring George Arliss, Loretta Young and Boris Karloff. It was adapted by Nunnally Johnson from the play by George Hembert Westley, and chronicles the rise of the Rothschild family of European bankers.

In 1780 in Frankfort, Prussia, youngster Nathan Rothschild warns his parents Mayer and Guttle that the taxman is coming. They hurriedly hide their wealth. The taxman demands 20,000 gulden, an exorbitant sum, but accepts a bribe of 5,000 in exchange for assessing them 2,000 in taxes. Mayer's satisfaction is short-lived, however; a courier bringing him 10,000 guldens is intercepted and the money confiscated by the taxmen. Mayer tells his sons that he tries to be as honest as possible, but the authorities will not let him; he admonishes his children to acquire money, for "money is power" and defense for their people.