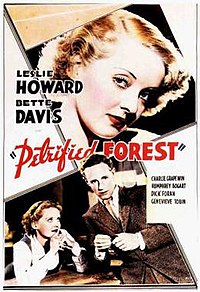 The Petrified Forest is a 1936 American film directed by Archie Mayo and based on Robert E. Sherwood's 1935 Broadway drama of the same name. The motion picture stars Leslie Howard, Bette Davis and Humphrey Bogart. The screenplay was written by Delmer Daves and Charles Kenyon, and adaptations were later performed on radio and television. The film is set in Petrified Forest National Park in Arizona.

In the midst of the Great Depression, Alan Squier (Howard), a failed British writer, now a disillusioned, penniless drifter, wanders into a somewhat frowzy roadside diner in the remote town of Black Mesa, Arizona, at the edge of the Petrified Forest. The diner is run by Jason Maple (Porter Hall), his daughter Gabrielle (Davis), and Gramp, Jason's father (Charley Grapewin), who regales anyone who will listen with stories of his adventures in the Old West with such characters as Billy the Kid.