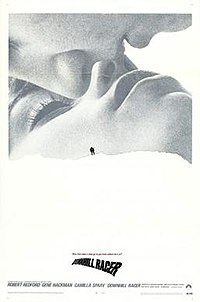 Downhill Racer is a 1969 American sports drama film starring Robert Redford, Gene Hackman and Camilla Sparv, and was the directorial debut of Michael Ritchie. Written by James Salter, based on the 1963 novel The Downhill Racers by Oakley Hall, the film is about a talented downhill skier who joins the United States ski team in Europe to compete in international skiing competitions. Sylvester Stallone appeared in one scene as an extra in his film debut.

American downhill skier David Chappellet (Robert Redford) arrives in Wengen, Switzerland, to join the U.S. ski team, along with fellow newcomer D. K. Bryan (Kenneth Kirk). Both men were sent for by team coach Eugene Claire (Gene Hackman) to replace one of his top skiers Tommy Herb (Joe Jay Jalbert) who was recently injured during an FIS competition. Raised in the small town of Idaho Springs, Colorado, Chappellet is a loner with a single-minded focus on becoming a skiing champion, and shows little interest in being a team player. After refusing to race at the Lauberhorn because of a late starting position, he makes his European skiing debut at the Arlberg-Kandahar in Austria, where he finishes in an impressive fourth position. In the final race of the season at the Hahnenkamm-Rennen in Kitzbühel, Austria, he crashes.