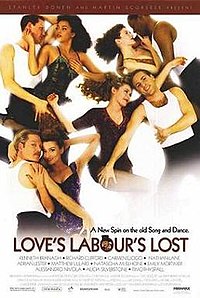 Love's Labour's Lost is a 2000 British musical romantic comedy film written, directed by and starring Kenneth Branagh, based on the comic play of the same name by William Shakespeare. The first feature film to be made of this lesser-known comedy, Branagh's fourth film of a Shakespeare play was a box-office and critical disappointment.

The King of Navarre has vowed to avoid romantic entanglements to spend three years in study and contemplation. His chief courtiers agree to follow him in this vow, though one (Berowne) argues that they will not be able to fulfill this plan.