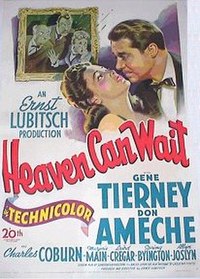 Heaven Can Wait is a 1943 Technicolor American comedy film produced and directed by Ernst Lubitsch. The screenplay was by Samson Raphaelson based on the play Birthday by . The music score was by Alfred Newman and the cinematography by Edward Cronjager.

An aged Henry Van Cleve enters the opulent reception area of "where innumerable people had told him so often to go", to be personally greeted by "His Excellency". Henry petitions to be admitted (fully aware of the kind of life he had led), but some doubt exists as to his qualifications. To prove his worthiness (or rather unworthiness), he begins to tell the story of his dissolute life.