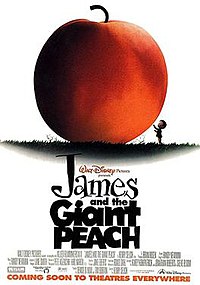 James and the Giant Peach 1996

James and the Giant Peach is a 1996 musical fantasy film directed by Henry Selick, based on the 1961 novel of the same name by Roald Dahl. It was produced by Tim Burton and Denise Di Novi, and starred Paul Terry as James. The film is a combination of live action and stop-motion animation. Co-stars Joanna Lumley and Miriam Margolyes played James's aunts in the live-action segments, and Simon Callow, Richard Dreyfuss, Susan Sarandon, Jane Leeves, David Thewlis, and Margolyes voiced his insect friends in the animation sequences.

In summer 1948, James Henry Trotter is a young orphan living with his sadistic and domineering aunts Spiker and Sponge. One day, after rescuing a spider from his hysterical aunts, James obtains magical "crocodile tongues" from a mysterious old man, which grows a colossal peach on nearby old peach tree that Spiker and Sponge exploit as a tourist attraction. At night, James eats through the peach to find a pit with several human-sized anthropomorphic invertebrates: Mr. Grasshopper, Mr. Centipede, Ms. Spider (who was actually the spider he saved from Spiker and Sponge), Mr. Earthworm, Mrs. Ladybug, and Mrs. Glowworm. As they hear Spiker and Sponge searching for James, Centipede cuts the stem connecting the peach to the tree and the peach rolls away to the Atlantic Ocean.