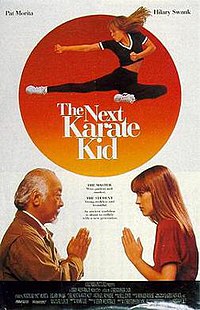 The Next Karate Kid is a 1994 American martial arts drama film, and the fourth installment in The Karate Kid franchise, following The Karate Kid Part III (1989). It stars Hilary Swank as Julie Pierce (in her first theatrical appearance in a starring role) and Pat Morita as Mr. Miyagi.

Mr. Miyagi travels to Arlington National Cemetery for a commendation for Japanese-Americans who fought in the 442nd Regimental Combat Team during World War II. He meets Louisa Pierce, the widow of his commanding officer Jack Pierce, and they both listen to the opening speech given by Senator Daniel Inouye.<ref>[ FEMININE ``KARATE KID IS HEAVY-HANDED]</ref>