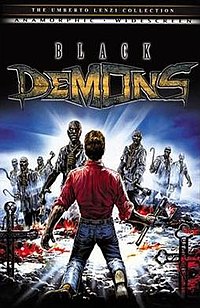 Demoni 3 (originally known as Black Demons) is a 1991 Italian horror film directed by Umberto Lenzi (his last horror film). It was written by Lenzi and his wife Olga Pehar, and the zombie makeup fx were handled by Franco Casagni. Lenzi said in later interviews that this was one of his favorite films, but he felt it was ruined by the low budget and some of the shoddy actors with whom he was forced to work.