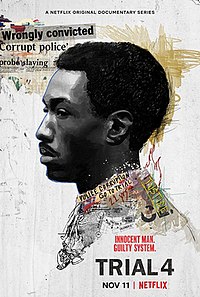 Trial 4 is a 2020 true crime documentary television series directed by Rémy Burkel. It tells the story of Sean K. Ellis, who was unjustly convicted as a teen in the 1993 killing of Boston police officer, John J. Mulligan. Sean K. Ellis fights for his freedom while exposing systemic racism and corruption within the justice system.