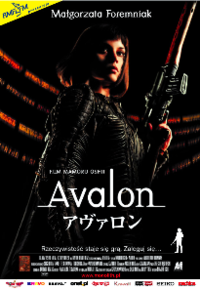 , also known as Gate to Avalon, is a 2001 Polish-language Japanese science fiction drama film directed by Mamoru Oshii and written by Kazunori Itō. The film stars Małgorzata Foremniak as Ash, a player in an illegal virtual reality video game whose sense of reality is challenged as she attempts to unravel the true nature and purpose of the game. Avalon was filmed in Wrocław, Nowa Huta, the Modlin Fortress and Warsaw. The 2009 film Assault Girls that was written and directed by Oshii, is a stand-alone sequel set in the same fictional universe as Avalon.

In a near future, many people are addicted to Avalon, a military-themed virtual reality shooter. In the game, solo players or parties raid levels populated with AI-controlled enemies and opposing players. Winners are rewarded with experience points and in-game money, which can be exchanged for cash, allowing skilled players to make a living. As their brains interact with the game directly, Avalon places significant mental strains on players, and has rendered players catatonic in many cases.