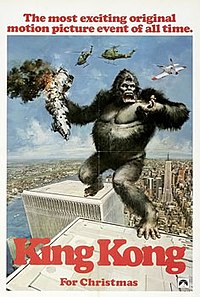 King Kong is a 1976 American monster adventure film produced by Dino De Laurentiis and directed by John Guillermin. It is a modernized remake of the 1933 film about a giant ape that is captured and taken to New York City for exhibition. It stars Jeff Bridges, Charles Grodin, and Jessica Lange in her first film role, and features mechanical effects by Carlo Rambaldi and makeup effects by Rick Baker. It is the 5th entry in the King Kong franchise.

In the 1970s, Fred Wilson, an executive of the Petrox Oil Company, forms an expedition based on infrared imagery which reveals a previously undiscovered Indian Ocean island hidden by a permanent cloud bank. Wilson believes the island has a huge deposit of oil. Jack Prescott, a primate paleontologist, sneaks onto the expedition's vessel and attempts to warn the team against traveling to the island, citing an ominous final message about "the roar of the greatest beast" from previous doomed explorers. Wilson orders Prescott locked up, assuming that he is a spy from a rival corporation. Wilson eventually makes Prescott the expedition's photographer. The ship happens upon a life raft which carries the beautiful and unconscious Dwan. Upon waking, Dwan tells Prescott that she is an aspiring actress who was aboard a director's yacht which suddenly exploded. During the rest of the ship's voyage, Prescott and Dwan become attracted to each other.