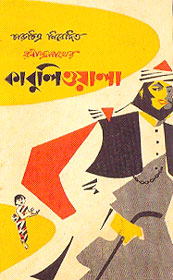 Kabuliwala ( Kābuli'ōẏālā, "Kabul wallah") is a 1957 Bengali film directed by Tapan Sinha and based on the eponymous 1892 short story by the Bengali writer Rabindranath Tagore.

Rahmat (Chhabi Biswas), a middle-age fruit seller from Afghanistan, comes to Calcutta to hawk his merchandise. He befriends a small Bengali girl called Mini (Oindrila Tagore aka Tinku Tagore) who reminds him of his daughter back in Afghanistan. He stays at a boarding house with his countrymen.