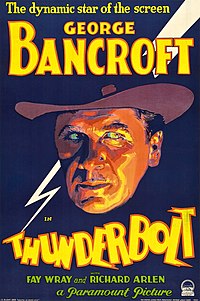 Thunderbolt (also released as At The Gates of Death) is a 1929 American Pre-Code proto-noir film directed by Josef von Sternberg and starring George Bancroft, Fay Wray, Richard Arlen, Tully Marshall and Eugenie Besserer. It tells the story of a criminal, facing execution, who wants to kill the man in the next cell for being in love with his former girlfriend.

Thunderbolt Jim Lang (George Bancroft), wanted on robbery and murder charges, ventures out with his girl, "Ritzy" (Fay Wray), to a Harlem nightclub, where she informs him that she is going straight. During a raid on the club, Thunderbolt escapes. His gang shadows Ritzy and reports that she is living with Mrs. Moran (Eugenie Besserer), whose son, Bob (Richard Arlen), a bank clerk, is in love with Ritzy. Fearing for Bob's safety, Ritzy engineers a police trap for Thunderbolt; he escapes but is later captured, tried, and sentenced to be executed at Sing Sing. From the death house, he successfully plots to frame Bob in a bank robbery and killing. Bob is placed in the facing cell, and guards frustrate Thunderbolt's attempts to get to his rival. When Ritzy marries Bob in the death house, Thunderbolt confesses his part in Bob's conviction. He plots to kill the boy on the night of his execution, but instead at the last minute his hand falls on Bob's shoulder in a gesture of friendship.