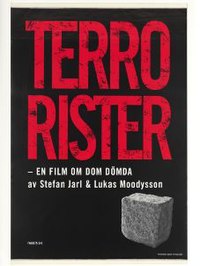 Terrorists: The Kids They Sentenced 2003

Terrorists: The Kids They Sentenced (orig. Terrorister - en film om dom dömda) is a Swedish 2003 documentary directed by Lukas Moodysson and Stefan Jarl. It is about the sentences given to rioters arrested during and after the Gothenburg Riots in conjunction with the European Union summit in Gothenburg 2001, many of whom were found guilty of various crimes in a large number of trials. The film is sympathetic to the rioters. It is 85 minutes in length, and was first shown on June 27, 2003.