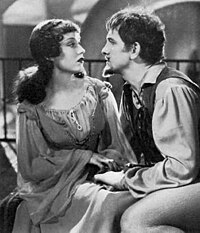 The Affairs of Cellini 1934

The Affairs of Cellini is a 1934 comedy film directed by Gregory La Cava and starring Frank Morgan, Constance Bennett, Fredric March, Fay Wray, and Louis Calhern. It is set in Florence. The film was adapted by Bess Meredyth from the play The Firebrand of Florence by Edwin Justus Mayer.

Both the duke and duchess have an eye for beauty and other partners. The duke presently fancies a young woman who poses as an artist's model. The duchess has her eye on the famous artist, Benvenuto Cellini, who is in the palace making a set of gold plates to be used at ducal banquets. Cellini purportedly hypnotizes young women, and cuckolds the duke of Florence. The somewhat oblivious duke is loath to punish the young man because Cellini fashions gold wares for him, but throws him into the torture chamber. However, a goblet of poisoned wine solves the problem.