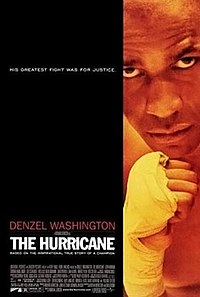 The Hurricane is a 1999 American biographical sports drama film directed and produced by Norman Jewison. The film stars Denzel Washington as Rubin "The Hurricane" Carter, a former middleweight boxer who was wrongly convicted for a triple murder in a bar in Paterson, New Jersey. The script was adapted by Armyan Bernstein and Dan Gordon from Carter's 1974 autobiography The Sixteenth Round: From Number 1 Contender To 45472 and the 1991 non-fiction work Lazarus and the Hurricane: The Freeing of Rubin "The Hurricane" Carter by Sam Chaiton and Terry Swinton.

The film tells the story of middleweight boxer Rubin "The Hurricane" Carter, who was wrongfully convicted of committing a triple murder in a bar in Paterson, New Jersey. His sentence was set aside after he had spent nearly 20 years in prison. The film concentrates on Rubin Carter's life between 1966 and 1985. It describes his fight against the conviction for triple murder and how he copes with nearly 20 years in prison.