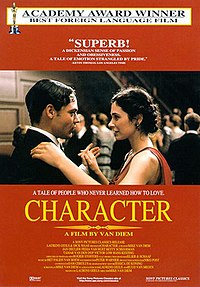 Character is a 1997 Dutch-Belgian film, based on the best-selling novel by Ferdinand Bordewijk and directed by Mike van Diem. The film won the Academy Award for Best Foreign Language Film at the 70th Academy Awards. The film stars Fedja van Huêt, Jan Decleir, and Betty Schuurman.

In the Netherlands of the 1920s, Dreverhaven (Decleir), a dreaded bailiff, is found dead, with a knife sticking out of his stomach. The obvious suspect is Jacob Willem Katadreuffe (Van Huêt), an ambitious young lawyer who worked his way up from poverty, always managing to overcome Dreverhaven's personal attacks against him. Katadreuffe was seen leaving Dreverhaven's office on the afternoon of the murder. He is arrested and taken to police headquarters, where he reflects back on the story of his long relationship with Dreverhaven, who, police learn, is also Katadreuffe's father.