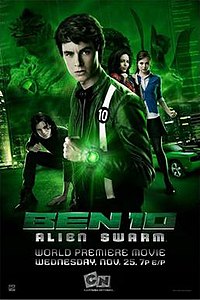 Ben 10: Alien Swarm is a 2009 American superhero television film directed by Alex Winter. It is based on the Cartoon Network animated series Ben 10: Alien Force and the second live-action movie after 2007's Ben 10: Race Against Time. The film stars Ryan Kelley, Galadriel Stineman, Nathan Keyes, Alyssa Diaz, Herbert Siguenza, and Barry Corbin. The film premiered on Cartoon Network on November 25, 2009, where it was watched by 4.02 million viewers. The events of the film take place between the second and third seasons of Ben 10: Alien Force.

The film opens as Ben, Gwen, and Kevin are negotiating with a group of black market dealers attempting to sell them alien nanochips, which are causing interference with the Omnitrix. One of them reveals herself to be Elena, a childhood friend of Ben and Gwen. Elena explains that she had set up negotiations to lure Ben out into the open, to seek his help in finding her abducted father.