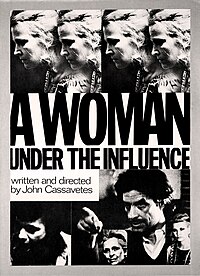 A Woman Under the Influence 1974

A Woman Under the Influence is a 1974 American drama film written and directed by John Cassavetes. The story follows a woman (Gena Rowlands) whose unusual behavior leads to conflict with her blue-collar husband (Peter Falk) and family. It received two Academy Award nominations for Best Actress and Best Director.

Los Angeles housewife and mother Mabel loves her construction-worker husband Nick and desperately wants to please him, but the strange mannerisms and increasingly odd behavior she displays have him concerned. Convinced she has become a threat to herself and others, he reluctantly commits her to an institution, where she undergoes treatment for six months. Left alone with his three children, Nick proves to be neither wiser nor better than his wife in the way he relates to and interacts with them, or in the role society expects him to play.