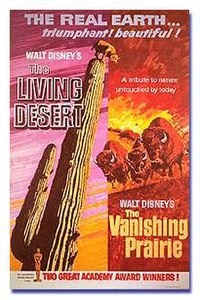 The Living Desert is a 1953 American nature documentary film that shows the everyday lives of the animals of the desert of the Southwestern United States. The film was written by James Algar, Winston Hibler, Jack Moffitt (uncredited) and Ted Sears. It was directed by Algar, with Hibler as the narrator and was filmed in Tucson, Arizona. The film won the 1953 Oscar for Best Documentary.