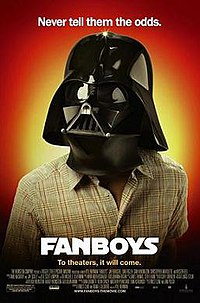 Fanboys is a 2009 American comedy film directed by Kyle Newman and starring Sam Huntington, Chris Marquette, Dan Fogler, Jay Baruchel, Kristen Bell, Danny McBride, and Seth Rogen. It was released in the United States on February 6, 2009, and in Canada on April 3, 2009.

In 1998, Eric Bottler reunites with his old high school buddies Linus, Hutch, Windows, and Zoe at a Halloween party. Now a car salesman at his father's dealership, Bottler finds that his friends have not matured since high school, though they all still share a love of Star Wars. The gang anticipates the latest film, Episode I: The Phantom Menace. Linus proposes Bottler and he infiltrate Skywalker Ranch and steal a rough cut of the film, a childhood plan that Bottler dismisses.