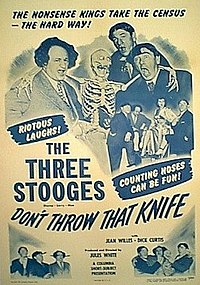 Don't Throw That Knife is a 1951 short subject directed by Jules White starring American slapstick comedy team The Three Stooges (Moe Howard, Larry Fine and Shemp Howard). It is the 131st entry in the series released by Columbia Pictures starring the comedians, who released 190 shorts for the studio between 1934 and 1959.

The Stooges are census takers strolling through an apartment complex when they come upon a woman called Mrs. Wyckoff (Jean Willes). The Stooges learn that Wyckoff is one-half of a husband-and-wife Magician Troupe who perform regularly. Unfortunately, Mr. Wyckoff (Dick Curtis) is also an evil man and a precise knife thrower who kills any perverted men who talks to his wife. When Mr. Wyckoff comes home, the Stooges make a failed effort to take cover. After several frightening threats, the trio depart as fast as their feet will carry them.