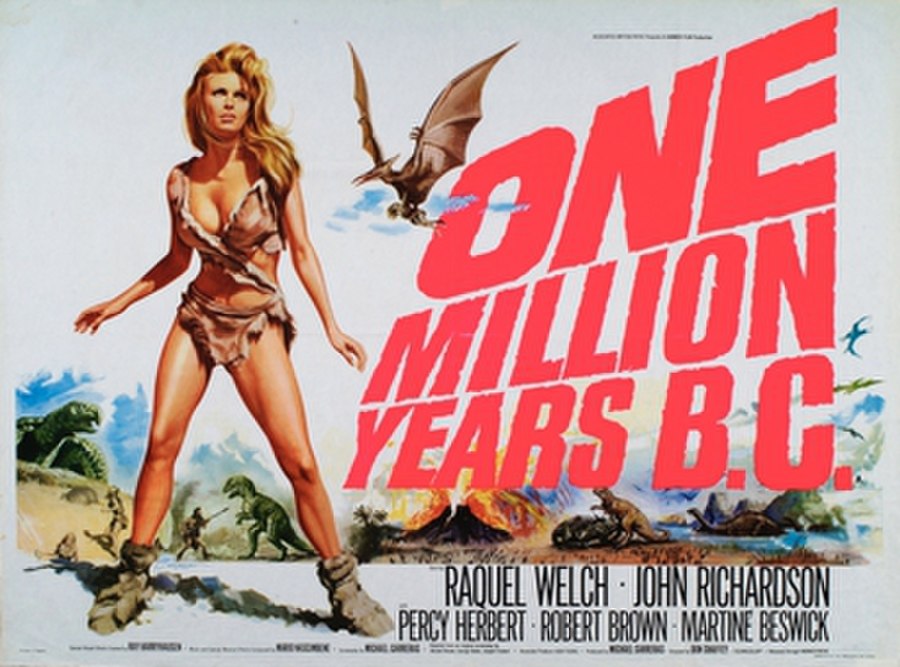 One Million Years B.C. is a 1966 British adventure fantasy film directed by Don Chaffey. The film was produced by Hammer Film Productions and Seven Arts, and is a remake of the 1940 American fantasy film One Million B.C.. The film stars Raquel Welch and John Richardson, set in a fictional age of cavemen and dinosaurs. Location scenes were filmed on the Canary Islands in the middle of winter, in late 1965. The U.K. release prints of this film were printed in dye transfer Technicolor. The U.S. version was cut by nine minutes, printed in DeLuxe Color, and released in 1967.

Tribal chief Akhoba leads a hunting party into the hills to search for prey. One member of the tribe traps a giant warthog in a pit, and then Akhoba's son Tumak kills it. The tribe brings it home for dinner. Tumak and Akhoba fight over who deserves more of the meat, and Tumak is banished to the harsh desert by his angry father. After surviving many dangers or amazing creatures such as a giant iguana, ape men, a plant-eating Brontosaurus, and a giant spider, he collapses on a remote beach along the Western Interior Seaway, where he is spotted by "Loana the Fair One" and her fellow fisher-women of the blond Shell Tribe. They are about to help him when an Archelon (which is three times the size of the actual prehistoric Archelon) makes its way to the beach. Men of the Shell tribe arrive and drive it into the sea. Tumak is taken to their village, where Loana tends to him. Scenes follow emphasising that the Shell tribe is more advanced and more civilized than the brunette Rock tribe. They have cave paintings, music, delicate jewelry made from shells, agriculture, and a rudimentary language–all things Tumak seems to have never before encountered.