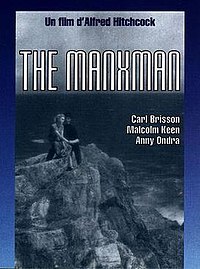 The Manxman is a 1929 British silent romance film directed by Alfred Hitchcock and starring Anny Ondra, Carl Brisson and Malcolm Keen. The film is based on a popular 1894 romantic novel The Manxman by Hall Caine, which had previously been made into a film 13 years earlier. It was the last fully silent production that Hitchcock directed before he made the transition to sound film with his next film Blackmail (1929).

The film tells the story of two close childhood friends, a handsome but poor fisherman, Pete Quilliam (Carl Brisson), and a well-educated middle-class lawyer, Philip Christian (Malcolm Keen); Both the young men are smitten with beautiful and lively Kate (Anny Ondra), the pub owner's daughter. In Pete's case, Kate is also interested in him, or at least she enjoys having him as a suitor.