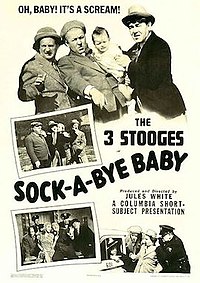 Sock-a-Bye Baby is a 1942 short subject directed by Jules White starring American slapstick comedy team The Three Stooges (Moe Howard, Larry Fine and Curly Howard). It is the 66th entry in the series released by Columbia Pictures starring the comedians, who released 190 shorts for the studio between 1934 and 1959.

The Stooges awake in the middle of the night to a crying baby left on their doorstep. A letter from the despondent mother (Julie Gibson) states that baby Jimmy (Joyce Gardner) has been abandoned. The Stooges react by taking the little guy in, feeding him, and trying their best to act fatherly.