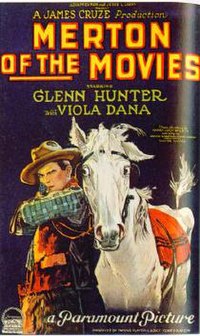 Merton of the Movies is a 1924 comedy film directed by James Cruze, written by Walter Woods, and starring Glenn Hunter and Viola Dana. It is based on the George S. Kaufman and Marc Connelly 1922 play of the same name, which in turn was based on Harry Leon Wilson's novel, also titled Merton of the Movies.

Merton is an aspiring movie actor. He is a terrible actor but when the movie executives see how funny his overacting is, they cast him in a comedy, but tell him that he's acting in a drama.