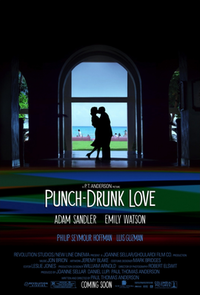 Punch-Drunk Love is a 2002 American black comedy-drama romance film written and directed by Paul Thomas Anderson, and starring Adam Sandler, Emily Watson, Philip Seymour Hoffman, Luis Guzmán and Mary Lynn Rajskub. It follows an entrepreneur with social anxiety in love with his sister's co-worker. The film was produced by Revolution Studios and New Line Cinema, and distributed by Columbia Pictures. It features the video art of Jeremy Blake in the form of visual interludes. The film received positive reviews from critics, with Sandler's performance receiving widespread acclaim, but failed to recoup the $25 million production budget at the box office.

Barry Egan is a single man who owns a company that markets themed toilet plungers and other novelty items. He has seven overbearing sisters who ridicule and emotionally abuse him regularly, and he leads a lonely life punctuated by fits of rage and social anxiety. One day, he witnesses an inexplicable car accident, picks up an abandoned harmonium from the street, and encounters Lena Leonard, a coworker for one of his sisters, Elizabeth. Lena had orchestrated this meeting after seeing him in a family picture belonging to Elizabeth.