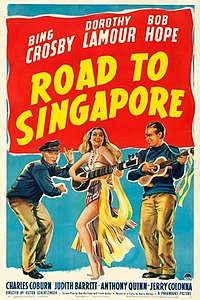 Road to Singapore is a 1940 American semi-musical comedy film directed by Victor Schertzinger and starring Bing Crosby, Dorothy Lamour and Bob Hope. Based on a story by Harry Hervey, the film is about two playboys trying to forget previous romances in the Colony of Singapore, where they meet a beautiful woman. Distributed by Paramount Pictures, the film marked the debut of the long-running and popular "Road to ..." series of pictures spotlighting the trio, seven in all. The supporting cast features Charles Coburn, Anthony Quinn, and Jerry Colonna. It takes place in Singapore under British Rule.

Josh Mallon (Bing Crosby) and Ace Lannigan (Bob Hope) are best friends and work aboard the same ship. As their ship returns to the US after a long voyage, they see all the other sailors being mistreated by their wives and girlfriends, and the two friends pledge never to get involved with women again. Unfortunately, this vow is tested almost immediately. First, Ace is confronted by the family of a former lover, Cherry, who insist he marry her. Then Josh, who is the son of rich shipping magnate (Charles Coburn), has to fend off his fiancée, Gloria (Judith Barrett), and his father's wishes that he settle down and take over the family business.