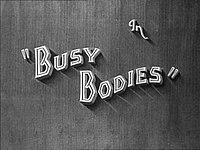 Stan and Ollie are in high spirits as they drive in an old Model T to their new jobs at the sawmill. Laurel turns on the car radio (at the time a luxury item in newer cars, not expected in an old jalopy); the "radio" is revealed to be a wind-up phonograph stashed under the car hood. Arriving at the sawmill, a slapstick sequence has them repeatedly walking into planks of wood. Starting work, Stan soon traps Ollie's hands in a window frame. After freeing him they trick a shop worker (Charlie Hall) into smoking despite a "No Smoking" sign. Stan then tears a strip off Ollie's pants with a plane and in the resulting 'tit for tat' dips a paintbrush in glue and sticks it onto Ollie's chin. Finding it is not possible to pull it off he prepares like a barber and shaves it with a plane. Ollie then gets propelled through a ventilator duct and out of an attic vent port.