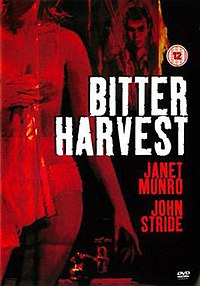 Bitter Harvest is a 1963 British drama film directed by Peter Graham Scott and starring Janet Munro and John Stride. The plot is about a young woman who rejects marriage to become a kept woman. The film is based on the book 20,000 Streets Under the Sky by Patrick Hamilton.

A beautiful but intoxicated woman, Jennie Jones (Janet Munro), returns to her London apartment late one night and begins to destroy its contents in a rage, throwing her purse, keys and many of her expensive gowns out into the street. Her story is then told in flashback.