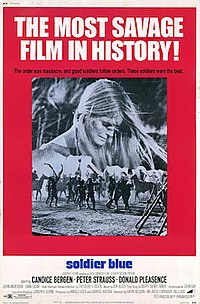 Soldier Blue is a 1970 American Revisionist Western film directed by Ralph Nelson and starring Candice Bergen, Peter Strauss, and Donald Pleasence. Adapted by John Gay from the novel Arrow in the Sun by T.V. Olsen, it is inspired by events of the 1864 Sand Creek massacre in the Colorado Territory. Nelson and Gay intended to utilize the narrative surrounding the Sand Creek massacre as an allegory for the contemporary Vietnam War.

In 1877 Colorado Territory, a young woman, Cresta Lee, and young Colorado Private Honus Gant are joined together by fate when they are the only two survivors after their group is massacred by the Cheyenne. Gant is devoted to his country and duty; Lee, who has lived with the Cheyenne for two years, is scornful of Gant (she refers to him as "Soldier Blue" derisively) and declares that in this conflict she sympathizes with them. The two must now try to make it to Fort Reunion, the army camp, where Cresta's fiancé, an army officer, waits for her. As they travel through the desert with very low supplies, hiding from the Indians, they are spotted by a group of Kiowa horsemen. Under pressure from Cresta, Honus fights and seriously wounds the group's chief when the chief challenges him. Honus finds himself unable to kill the disgraced Kiowa leader, whose own men stab him leaving Honus and Cresta alone. The ideological gulf between them is also revealed in their attitudes towards societal mores, with the almost-puritanical Honus disturbed by things Cresta barely notices.