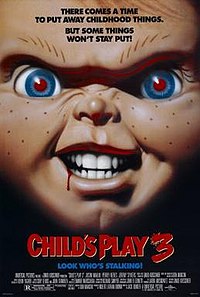 Child's Play 3 is a 1991 American slasher film and the third installment in the Child's Play film series. The film is written by Don Mancini and directed by Jack Bender, with Brad Dourif returning as the voice of Chucky. Although released only nine months later, the story takes place eight years following the events of Child's Play 2 and one month before the events of Bride of Chucky (which was made seven years later). It was executive-produced by David Kirschner, who produced the first two Child's Play films.

Eight years after Chucky's second demise, the Play Pals company has recovered from the bad publicity brought about by Chucky's murder spree and resumes manufacturing of the Good Guys dolls. The company restores the abandoned factory (where Chucky's mutilated body still remains) and starts releasing a new line of Good Guys dolls. However, the workers accidentally mix Chucky's blood into a vat of plastic. Since the soul of serial killer Charles Lee Ray still inhabits the remains, the mixture causes Chucky to be reborn. Chucky is unwittingly given to Play Pals' CEO Mr. Sullivan, whom he kills with a variety of toys. He then uses computer records to locate Andy.